Novameat has focused on develop protein from sources other than traditional livestock.

Made by Novameat this 3D printed vegan steak imitates the meat micro-fibers of an actual beefsteak, rather than the ground meat of burgers, like most meat substitutes. Novameat’s method of creating meat-like plant based proteins involves using syringes filled with plant-based ingredients to form a fibrous structure that can be built, line by line. Novameat’s mission is to feed the planet’s growing population through the better management of our planet’s resouces. Novameat’s 3D printed steak is synthetic and vegan, and was created as a meat-free alternative to animal farming. The gelatinous steak is made of rice, peas, and seaweed protein. 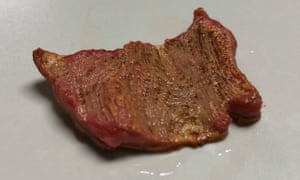 World meat production increased by 1.0% to 327 Mt in 2018, reflecting increases in the production of bovine, pig and poultry meats, with very modest gains in sheepmeat.

The global market for meat alternatives is the fastest growing segment of the food industry and is expected to reach $140 billion annually by 2030. While there is a new wave of alternative meat products, the food industry relies on analog technologies to develop and produce them. The pace of innovation and the rate of the adoption pales in comparison to the rapidly growing demand for better products.

The meat industry and its use of animals is the world’s most inefficient industry. Humanity’s ever-increasing desire for meat and the billions of animals needed to feed our hunger comes at a huge environmental cost. One billion cattle beef cows are used to meet demand. These cows consume more fresh drinking water than all humans on the planet, produce more environmental pollution than all cars in use worldwide, and eat enough food to feed billions of humans. Livestock farming uses 1/10 of the Earth’s available freshwater and is the leading cause of deforestation.

Lab-Grown Meat, We Will Be Eating Soon