Cobras, The Things We Should Know About Them

We’ve all heard about cobras. Some of us think cobras are the biggest snakes in the world. Or there are no people who do not know that they are famous for their venom. But there’s a lot we don’t know about cobras. Let’s all go on an engrossing and slightly chilling adventure together.

Snakes are an assorted group of reptiles, classified in the phylum Chordata, subphylum Vertebrata, and class, reptilia that comprise approximately 2,800 species and can be classified into 20 families. Snakes are found in every continent except Antarctica. The first fossil records of snakes dated back to the Cretaceous period. All snakes are strictly carnivorous.

Some snakes have a venomous bite, which they use to kill their prey before eating it generally by injecting venom into their prey. Other snakes are non-venomous and kill their prey by constriction, although biting their prey, they don’t inject deadly venoms. Complications may arise from wound infection and retained tooth of the snake in the puncture wound. Others swallow their prey whole and alive.

Naja nigricollis or the black-necked spitting cobra is a venomous snake species belonging to the family Elapidae, which is the most venomous and widely distributed snake family. It is one of the most important snakes associated with envenoming in Nigeria. Its toxicity values make it an important snake to be identified and any sightings should be reported to appropriate authorities. 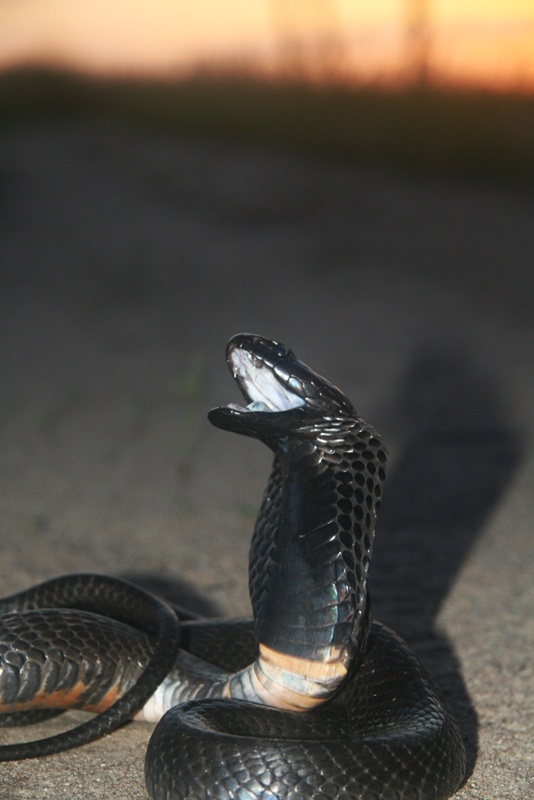 From the experiment carried out, toxicity results showed physical signs including hypersensitivity, partial paralysis, and death of experimental animals. Farmers and rural dwellers need to be aware as well as prepared with adequate antivenin should the need arise that Naja nigricollis is indeed a venomous and dangerous snake.

The genus naja contains exclusively venomous elapid snakes known as cobras (true cobras). Other elapid species called “cobras” such as the king cobras and rinkhals aren’t TRUE COBRAS in that they do not belong to the same genus (Naja). They grow in length to about 1.84 m ad larger species attaining a length of up to about 3.1 m.

Diversity in the Genus Naja Cobra

Species of snake in the genus naja are broadly distinguished into Spitting and non-spitting cobras. The non-spitting cobras’ venom is predominantly neurotoxic and induces paralysis without necrosis at the bite site leading to nervous system complications. The other species, however (spitting cobras) are characterized by a cytotoxic pattern of envenomation. Their venoms contain cytotoxins as well as cytosolic phospholipases which are suggested as the main factor responsible for swelling and necrosis as clinical features at the bite site.
The spitting cobras are unique having a specialized venom delivery mechanism using their front fang to propel venom out of their mouth with accuracy at a range of about 2 m. Their venoms act as an irritant causing a severe burning sensation on the skin and if shot into the eye, without proper and immediate care can lead to permanent blindness.
The Naja nubia is unique. A spitting cobra is native to Africa that exhibits both cytotoxic and neurotoxic properties perfectly blending both cytotoxic and neurotoxic elements in its venom.

Lethality of The Genus Naja Cobra

All species in the genus are able to deliver fatal bites to their prey. Their venoms are neurotoxic as well as cytotoxic. Affecting the nervous system leading to paralysis, swelling, and necrosis. The most lethal snake specie in the genus naja is the Naja oxiana found mainly in central Asia hence referred also as the central Asia cobra.

Vision attended the Federal University of Agriculture in Benue Nigeria. He currently holds a BSc in Biochemistry. Vision has extensive laboratory experience in industrial and agricultural biotechnology. Vision now is a Guest Author on TORGENE.

Why Are Plants Green and Not Black?